Caught in the rain without an umbrella 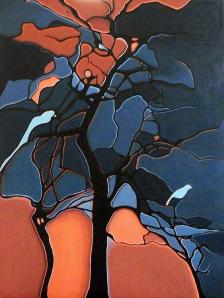 Yesterday, on such a hot, hot day, (103 degrees) I decided to treat myself to an avocado freeze from the smoothie place nearby. I was downtown and had some time to spare before teaching my next yoga class, so I decided to sit in the park for a moment and cool off with my cool drink. (Yes, it sounds preposterous to want to sit outside in that heat, but a cloud cover had appeared almost out of nowhere and cooled it down a bit.)

I looked up and saw a magnificent storm cloud – evidence that it was going to rain… eventually. Hopefully, after I had made it back to the gym. There was no mention of rain in the forecast for that early in the day. But then, one solitary drop. Then, the sound of thunder. And on that note, I headed to the bus stop a few feet away that had a 3-sided shelter. That was fine for a while, but as the wind picked up, the raindrops managed to find me. Not so bad at first, since it wasn’t raining terribly hard at that point.

A family – husband, wife, and daughter – came to join me, taking shelter under the bus stop canopy. He was nice enough to stand in front of them and shield them from the rain that was still coming in under the shelter. Sweet. Then the storm really picked up, and the rain starting blowing sideways!

The gentleman discovered that because of the angle and direction of the wind, the best shield from the rain was actually behind the bus shelter. That worked   for a few minutes, and then we all realized it was a lost cause. The rain was surprisingly cool, almost too cool. And as the rain pelted us from seemingly all angles, we all found our sense of humor, laughing at the situation. Nothing much we could do about it anyway. He took off his shoes and let his feet stand in a sidewalk puddle, as did his daughter. And he even swished his feet a bit in the curbside puddle that had formed beside the street.  My toes were surely wet in my sandals, and I could even feel some grit from the sidewalk under my feet. I didn’t feel the urge to place my bare feet on the pavement.

They decided to take a bus back to their hotel. Even in the midst of getting caught in the storm, they relayed that Chicago was their favorite big city. They were enjoying their visit here from South Carolina. After some time, I realized that I was waiting for a bus that didn’t run until later in the day, and hopped on the next bus that came along – very uncomfortable in my cold wet clothes with the a/c on blast.  I made it to my destination a few minutes late, but was thankful to be at a place where I could change into dry clothes.

I do appreciate a good storm – admittedly, usually witnessing them from the inside looking out; but it was kind of fun to get caught in the rain without an umbrella. It’s been a while since I’ve played in the rain. And it smelled glorious.    I love that moist earth smell. It smells like life, fertility, home…

[Petrichor is the scent of rain on dry earth. The word is constructed from Greek, petra, meaning stone + ichor, the fluid that flows in the veins of the gods in Greek mythology.] Wikipedia

Monica J. Brown is a multi-disciplinary artist.
View all posts by mymyriadmuse →
This entry was posted in Uncategorized and tagged petrichor, rain, storm. Bookmark the permalink.