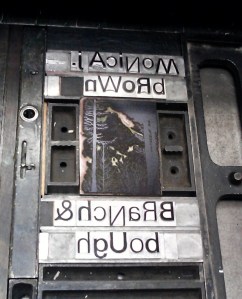 Musing through Robert Bringhurst’s The Elements of Typographic Style…

Yes, I know, it doesn’t sound altogether appealing as reading material—there will inevitably be technical mumbo-jumbo, which will only make sense in practical application. However, I found it to be quite poetically written, with analogies to music and metaphors that, though applied to typography, could also apply to life in general. I would like to share some of these lines of text that stood out for me in this reading. The epigraph of the book begins with a quote from Kimura Kyūho’s On the Mysteries of Swordsmanship, ca. 1768:

Everything written symbols can say has already passed by. They are like tracks left by animals. That is why the masters of meditation refuse to accept that writings are final. The aim is to reach true being by means of those tracks, those letters, those signs—but reality itself is not a sign, and it leaves no tracks. It doesn’t come to us by way of letters or words. We can go toward it, by following those words and letters back to what they came from. But so long as we are preoccupied with symbols, theories, and opinions, we fail to reach the principle.

But when we give up symbols and opinions, aren’t we left in the utter nothingness of being?

As a yoga instructor with an interest in the Tao Te Ching, I was immediately moved by the concept held within this excerpt—the idea that the path leads to “the way” but is not “the way.”

Below is a list of quotes within the text that moved me, caused me to pause, to contemplate. I have taken some of it out of its context of typography to further draw attention to the more universal ideas that it evokes.

Letters are microscopic works of art as well as useful symbols. They mean what they are as well as what they say.

It takes various forms and goes by various names, including serenity, liveliness, laughter, grace and joy.

By all means break the rules, and break them beautifully, deliberately and well. That is one of the ends for which they exist.

Monica J. Brown is a multi-disciplinary artist.
View all posts by mymyriadmuse →
This entry was posted in Uncategorized and tagged Kimura Kyūho, On the Mysteries of Swordsmanship, Robert Bringhurst, Tao Te Ching, The Elements of Typographic Style. Bookmark the permalink.