I Hate Chaturanga – or – Joy in Repetition, Part I

Posted on September 26, 2016 by mymyriadmuse 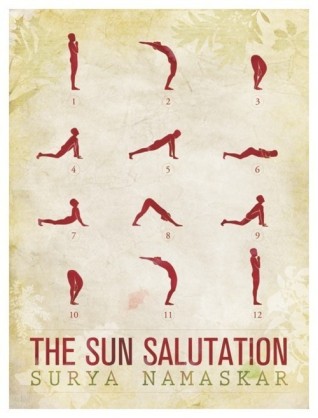 I recently had the opportunity to assist in teaching a Yoga Mala – 108 Sun Salutations. I have never done a yoga mala. I hate chaturanga. Really. It’s just never been one of my favorite poses. Once I learned that I actually had to the strength to do this pose, I enjoyed doing two or three of them. But 108? Bah!

There is, however, joy in repetition. I use this philosophy in my paintings, often working from a template that gets repeated and re-created through size and palette. I use this philosophy in yoga classes that I teach when students are holding a challenging or difficult pose, reminding them that repetition works as well as a long hold, and that releasing the pose and then moving back into it is perfectly legit.

Now, I’ve decided to use this philosophy in a personal challenge of completing a yoga mala. 12 Sun Salutations (Surya Namaskar A), for 9 days equals 108 (mala).

A mala is a string of prayer beads often used by Hindus and Buddhists to count prayers. The number 108 is said to represent the number of mortal desires of (hu)man(s). 108 to dissolve that which is holding you back. 108 for creating tapas (austerity, discipline, fiery passion).

The first day, it was interesting to note that my body definitely did not want to do 12 chaturangas. I listened to my body and substituted Ashtanga Namaskara (knees, chin, chest pose). I’m inspired by the notion of developing more upper body strength and core power.

I recently met a beautiful young soul who I will call Rose. She is the seven year old daughter of a dear friend. Rose has mastered the monkey bars. During a family visit to the park, I watched as she moved with ease from bar to bar, sometimes skipping one in between swings. Back and forth she went: joyful, countless times. She made me want to try it. I managed to make it across, but with much effort. I told her that she was my hero, that I wanted to be strong like her. This nine day mala is the volition of my intention to be strong like Rose.